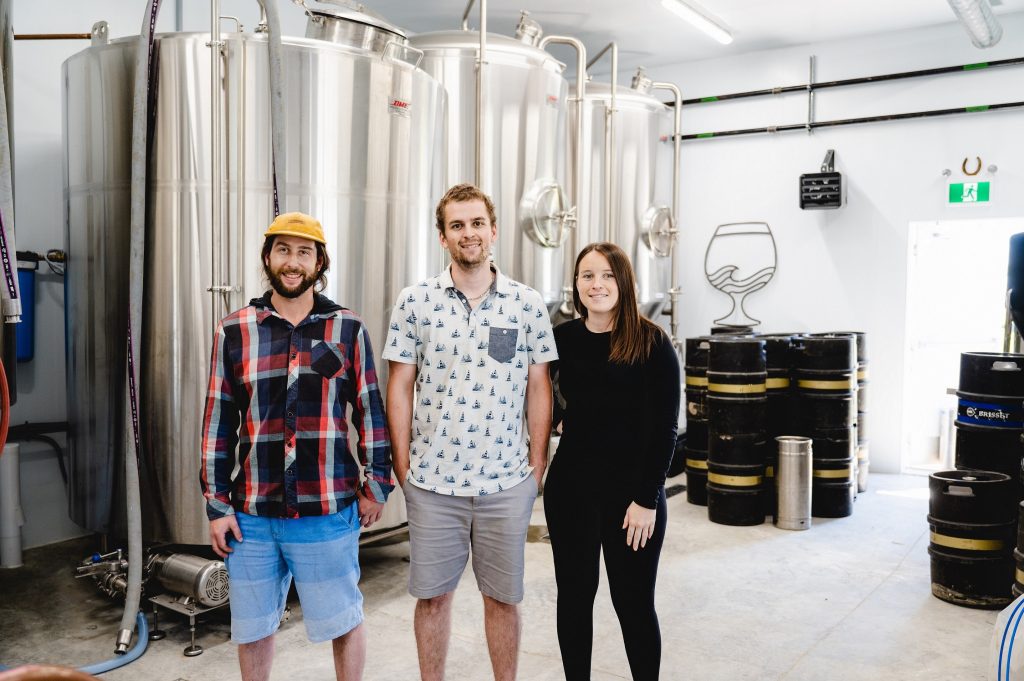 When opening their microbrewery La belle aventure in August 2022, three young Gaspesians wanted to give Bonaventure a festive and meeting location, combining a bistro-bar, a restaurant and an events location. A meeting with Sébastien Cayouette, co-owner, about this microbrewery which obtained support from the SADC Baie-des-Chaleurs.

According to Sébastien, the microbrewery stands out first of all by the various aspects it features, by combining the production and marketing of its beers, the events aspect and the bistro-bar. “There is a different ambiance at the bistro, something that was not in Bonaventure and the area. This is a festive gathering place!” According to him, the beers brewed by La belle aventure are distinguished by their quality, the local ingredients which are advantageously used, and their accessibility. “Blond and white beers are sure to please everyone who wants to taste microbrewery beer for the first time.”

“I always knew that I would be an entrepreneur” said Sébastien, who studied administration. “I didn’t know in what field, but I always had this project in mind.” Fond of beer, he and his partners wanted to have a project dealing with this common passion. “During our trips, we always visited microbreweries. We liked the atmosphere they would give to a village. So we said to each other: why not bring this home to Bonaventure? We wanted to create everything by ourselves, from A to Z, something that would be true to us and which would suffuse life into Bonaventure.”

La belle aventure obtained a loan from the SADC investment fund. Sébastien underlined the fact that he had obtained advantageous loans in his Stratégie jeunesse (Youth Strategy) program. “They got on board the project right away! They were the first to accept it and were always very flexible in their loans and conditions. They are very proactive. It’s easy to work with them.”

Tell Us About a Noteworthy Achievement of Which You Are Especially Proud as an Entrepreneur (for Example, in Sustainable Development)

This winter, La belle aventure will market its beers in cans. They will be sold on site at the bistro and in grocery stores, deps and in specialized businesses in the Baie-des-Chaleurs region. “In one year, we will be targeting the Gaspésie region,” proudly mentioned Sébastien. On the other hand, to enhance its residual materials, the Microbrasserie gives its beer production residue to the Ferme Le Caprivore, which uses it to nourish its animals. La belle aventure also experiments with local products. “It’s important for us to enhance local products,” specified Sébastien. Last summer, the microbrewery’s seasonal beer was developed with haskap berries from the Verger Cambrook in Bonaventure. Tests will also be conducted shortly with coffee roasted in the Gaspésie region.

What Advice Would You Give to Anyone Who is Considering Starting Up a Business in the Baie-des-Chaleurs Region?

“Persevere” said Sébastien. “Not listen to people who try to discourage you. If you believe in your idea, you’ve got to do it!” He said that he and his partners dealt with various obstacles during the development of their project, from 2019 to 2022, right in the middle of the pandemic. “In three years, we often told each other that the project would not go through.” According to him, when there are challenges, you mustn’t stop but rather “find innovative ways to deal with them.”

Marc-Olivier Forest-Poirier, Sébastien Cayouette and Marie-Pier Dion purchased the former restaurant Rendez-vous in the heart of Bonaventure in 2020, to install their bistro-bar. Their beer production is located in a brand new building in the back.