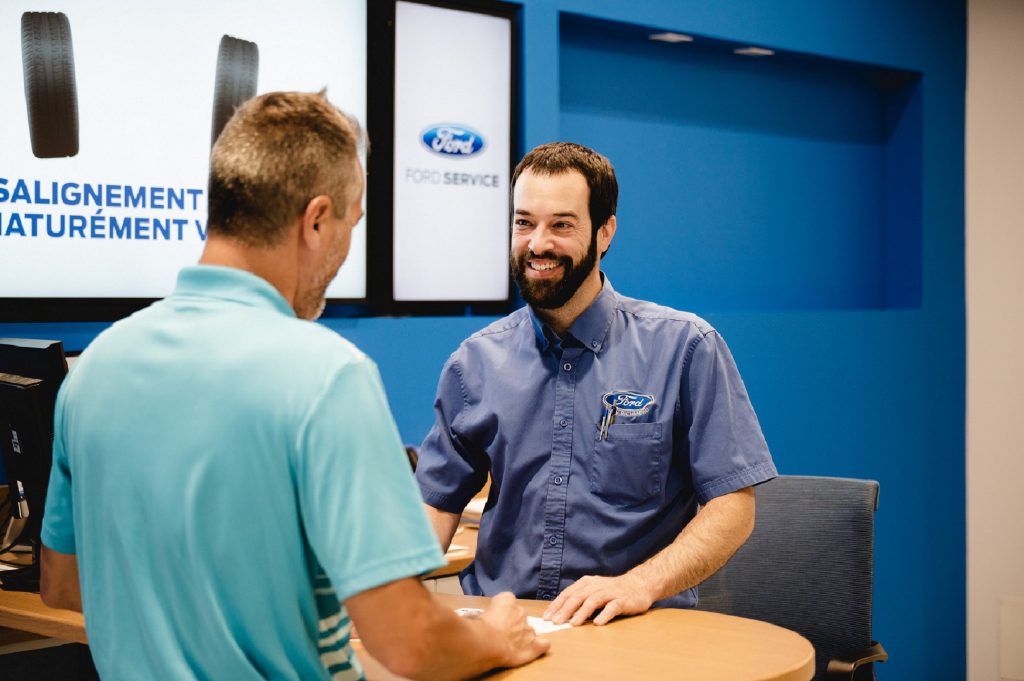 Co-owner of Subaru New Richmond since 2010, René Leblanc has also acquired Ford New Richmond with Adam and André Leblanc (his brothers) and Matthew O’Reilly in 2018. Together, they undertook major enlargement work for the Subaru dealership and the construction of a new building for Ford. A meeting with René about these businesses, which recently received support from the SADC Baie-des-Chaleurs.

A Thumbnail Sketch of the Businesses

Ford and Subaru New Richmond feature a broad range of new and previously-owned vehicles. Whether in the sales department, the after-sales service department or in the maintenance department, their teams ensure a warm welcome and personalized service. Both businesses are sure to meet the needs of purchasers and owners of Ford and Subaru vehicles in the Gaspésie region, while having a young and dynamic approach to customer experience. There is a total of 27 members in their combined teams.

In What Way are your Businesses Unique?

“We are different due to the family approach we have as owners-occupiers,” says René. He and his partners try to give their businesses a human and personalized aspect and they want their businesses to stay open in the coming years. “We are locals and we are not afraid of letting our roots grow here. We are involved in all kinds of endeavours. We are a local business that participates in development initiatives.”

Why did You Choose to be in Business?

“I became involved in business when I was 21 years old, said René. (. . .) I was doing a bachelor degree in kinesiology. My brother Adam was a mechanic in Quebec City.” Adam proposed to René to purchase a “garage” together. After mulling it about, René, who was always enthused about automobiles, decided to go along. “If we’re there today, its because Peter [Cyr, the owner of Subaru at that time] decided to sell to two youngsters. He saw us as succeeding him and showed us the ins and outs.”

“The SADC was always there for each project!” said René, who specified that on several occasions he and his partners obtained financing from the Investment Fund and from the Stratégie jeunesse program for both their businesses. “But the greatest support from the SADC was not monetary, it was infusing confidence in this project.” René underlined that once SADC support was ensured, “the other partners got on board” more easily.

Tell us about a noteworthy achievement of which you are especially proud as an entrepreneur.

“Our Ford plan,” said René, referring to the building erected in 2021. According to him, everything was thought out by the four partners: the site, lighting, walking distance inside the building, etc. “We visited several buildings and we sat down at the design table. We thought out the plan, worked on it and designed it so well that Ford bought it from us and it is now a prototype for a type D dealership.” According to René, for dealerships with an annual sales volume similar to Ford New Richmond, “this is the frame that’s going to be used throughout the world!”

What advice would you give to anyone who is considering starting up a business in the Baie-des-Chaleurs region?

“Ask yourself if that’s really what you want to do, and if so, do it!” affirmed René.  “I always considered that the coolest place to open a business was in the Gaspésie region. There’s so much to do! You don’t even have to reinvent the wheel.” He did specify however that being in business was not for everyone. It’s demanding and you have to really devote yourself. According to him, what is required is “an unconditional love of what you’re doing.”

René Leblanc, Adam Leblanc and Matthew O’Reilly are the owners of Ford New Richmond since 2010. In 2016, André Leblanc joined the team. He enhanced used car sales and then became a shareholder. The four partners subsequently acquired Ford New Richmond in 2018.