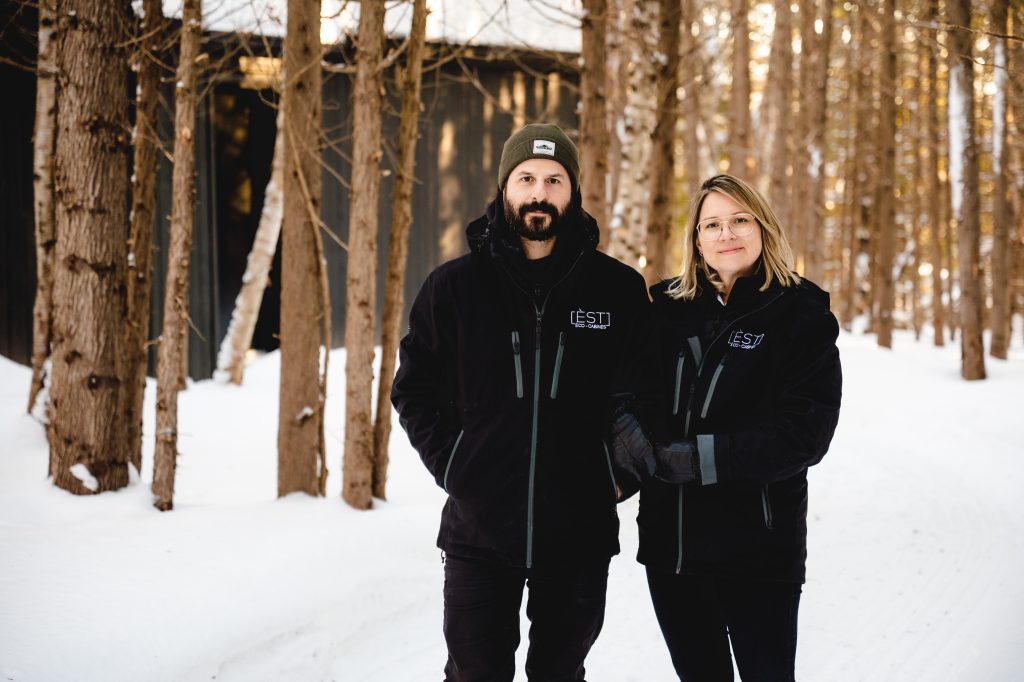 ÈST éco-cabines opened for business in July 2021 in Miguasha to feature quite a new glamping experience in the region. Six months later, a thermal spa was added to its offering. A meeting with Louise Landry, co-owner, about this business which obtained support from the SADC of the Baie-des-Chaleurs.

Founded by Louise Landry and Maxime Leclerc, ÈST éco-cabines is a glamping business. Six cabins (thuya) are built in a dense and mature cedar forest, while two cabins (Ublo) are perched on a cliff with a view on the Baie des Chaleurs. The business also features a thermal spa which is available with or without lodging. It features a dry sauna, a Hamman, two hot and cold tubs and two relaxation zones (indoors and outdoors). A self-service welcoming area is in the main building, along with three spacious private bathrooms having large showers and heated floors.

“By being near to nature with exceptional comfort” mentioned Louise. Glamping in cabins is also distinctive in itself. “This is a new offering which is not found elsewhere in the region.” The business also wanted to feature a self-service welcome desk without compromising on client service. “Everything is thought out to allow the client to be independent on-site and not depend on a reception desk.” For example, the business sends the client the cabin number and the access code by text message and a firewood distributing machine is available. “This is a more streamlined experience.”

“This career came to me and I seized the opportunity!” said Louise. With a Master’s degree in sociology, she recently became a process optimization consultant. “This is when I began to master corporate management.” Maxime, who is the co-owner of GROOM, a business marketing personal care products for men, was also working as a soundman. In August 2020, when the couple was vacationing in the region, they visited land for sale in Miguasha. “This was an opportunity we had. It wasn’t planned at all. We had a tremendous crush!” Stimulated by the idea of operating a glamping outfit in that location, the couple submitted its business plan to financers four months later and everything became reality in the summer of 2021.

“We had financial support with the Youth Strategy Fund and a regular loan,” mentioned Louise. “This was a $1.5 million project. We needed seed capital to start up.” She also underlined the support given by an SADC business counsellor, Vanessa Ratté. “We received a lot of advice and discussed matters with her to check on weaknesses in the business plan. She really gave us support during the start up.”

Tell Us About a Recent Noteworthy Achievement of Which You Are Especially Proud as an Entrepreneur.

Louise mentioned the environmentally friendly aspect of the business. “When we had the eco-cabins built, it was clear to us that we would cut as few trees as possible in our cedar grove. We selected each tree. We made an ecological choice.” In addition, there is no septic tank on-site. “We installed odourless, electrical compost toilets.” Lastly, wood, which is a long-lasting material, was used to build the units.

What Advice Would You Give to Anyone Who is Considering Starting Up a Business in the Baie-des-Chaleurs Region?

“Do it, have confidence in yourself!” burst out Louise. According to her, the region has a great entrepreneurial potential which is untapped. “The world remains to be built, there’s room for that.” She reminded persons who are afraid to be go-getters that they are not alone. “We had numerous partners who supported us, such as the SADC, the Avignon MRC, Investissement Québec and Economic Development Canada. There are all kinds of resources. You are less likely to delve into the great unknown when partners are there to support and help you.”

About Maxime Leclerc and Louise Landry

Originally respectively from Sainte-Foy and Carleton-sur-Mer, Maxime Leclerc and Louise Landry escaped life in Montreal to found ÈST éco-cabines. Maxime works there as director of operations, while Louise is the administration and financial director. They are also the happy parents of a boy born in the Gaspésie region in 2021.