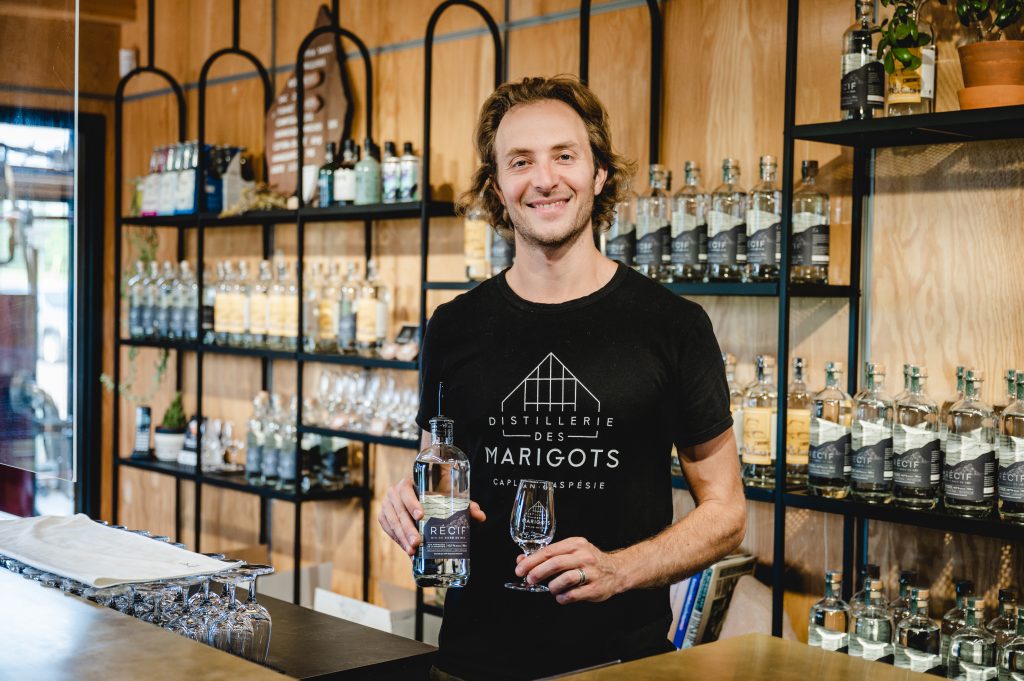 Joseph St-Denis Boulanger and his spouse, Laurie-Anne Cloutier, founded the Distillerie des Marigots in Caplan in 2019. Since it was introduced at the end of 2020, their gin, called Récif, has received impressive honours internationally. A meeting with Joseph regarding entrepreneurship and the Distillerie, for which the SADC de Baie des Chaleurs gave support.

The Distillerie des Marigots features spirits which are outstanding with their refined aspect and their rich taste which is typical of Gaspesian regional products. In addition to its flagship product, the Récif gin, the Distillerie has added small experimental batches, such as the Série exploratoire (exploratory series).

“We stand out by featuring tastes found in the Gaspésie region, with no compromises,” affirmed Joseph. The richness of aromas is very important, as well as the quality of ingredients and equipment used. There is no compromise as far as quality is concerned.” The Distillerie also offers exclusive products to visitors, such as certain ones which are only sold on site. The general public can also be a witness to these activities. “There is proximity to the reality of distillation.”

According to Joseph, “I’ve been an entrepreneur since a long time ago. At the age of 12 I used to sell hiking poles in the Signature Gaspésie network!” When he was in Secondary 5, he already wanted to be an entrepreneur and he studied engineering just to become an entrepreneur.” I like to create something that will last and to invest my time and energy in something of my own.”

The Distillerie obtained a loan from the SADC investment fund. To start up the business, Joseph and Laurie-Anne both took out loans from the Stratégie jeunesse (Youth Strategy) fund. Joseph also underlined the fact that he was given much good advice from the SADC team members. “They gave me their impressions and recommendations to improve the business plan.”

Tell us about a recent noteworthy achievement of which you are especially proud as an entrepreneur (ex.: in the field of sustainable development).

“We re-use stale-dated beer from the Naufrageur to upgrade it into whiskey. We also implemented a bottle recovery system. We have now collected 500!”  Joseph constantly tries to seek opportunities to upgrade residual materials. He says that he has recently joined Synergie Gaspésie, a circular economy project in which there may be other occasions to create links with other local businesses.

What advice would you give to anyone who is considering starting up a business in the Baie-des-Chaleurs region?

“Do not hesitate to contact all economic and development actors!” According to him, these people “go that extra mile and work to make things happen. These people are enthusiastic and they are there to find a way to make things happen for you.” He also underlined the importance of including the community in a project. “The community is one of the strengths in the Baie-de-Chaleurs region. It is behind businesses and welcomes them with open arms.” According to Joseph, part of the pleasure is having it involved in the business and vice versa.

About Joseph and Laurie-Anne

Born in Caplan, Joseph St-Denis Boulanger is the President and Master Distiller in the business. Originally from Montreal, Laurie-Ann Cloutier holds the position of Vice-President.